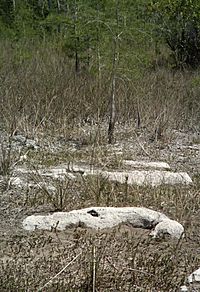 Rock outcroppings in the prairie north of Concho Billy Trail

Geography and history of establishment

Human use and impact

Ecologically, the preserve is slightly more elevated than the western Everglades. Big Cypress was historically occupied by various cultures of Native Americans; the last were the Seminole of the nineteenth century. Their descendants include the federally recognized Miccosukee Tribe of Indians of Florida and the Seminole Tribe of Florida.

Early European-American settlers hunted herons and egrets, whose feathers were extremely popular with 19th and 20th-century hat-makers in New York and Paris. Poachers hunted American alligators and crocodiles to near extinction. When the timber industry began to operate in the area, it built railroads, and cut and hauled out most of the cypress ecosystem's old growth trees. Portions of the Big Cypress were farmed for winter vegetables.

The search for oil in Florida began in 1901, but with no success. After almost 80 more dry holes had been drilled throughout the state, on September 26, 1943 Humble Oil Company (later to become Exxon) discovered Florida's first producing oil well in the northwest portion of what is now Big Cypress National Preserve. The wells currently produce about 20 barrels of oil per day.

Big Cypress National Preserve differs from Everglades National Park in that, when it was established by law in 1974, the Miccosukee, Seminole and Traditional people were provided with permanent rights to occupy and use the land in traditional ways; in addition, they have first rights to develop income-producing businesses related to the resources and use of the preserve, such as guided tours. They and other hunters may use off-road vehicles, and home and business owners have been permitted to keep their properties in the preserve. As in Everglades National Park, petroleum exploration was permitted within Big Cypress in the authorizing legislation, but plans are under way for the government to buy out the remaining petroleum leases in order to shut down non-governmental commercial access to the environment.

In the 1960s, Native Americans, hunters, and conservationists succeeded at fighting an effort to move Miami International Airport's international flights to a new airport in the Big Cypress area. They followed up with a campaign to have Big Cypress included in the National Parks System. Although construction of the new airport had already begun, it was stopped after one runway was completed. It is now known as the Dade-Collier Training and Transition Airport.

The preserve is highly diverse biologically. Dominated by a wet cypress forest, it is host to an array of flora and fauna, including mangroves, orchids, alligators, venomous snakes like the cottonmouth (Agkistrodon piscivorus conanti) and eastern diamondback rattlesnake (Crotalus adamanteus), a variety of birds, the Florida panther, (Puma concolor couguar) and the Florida black bear. 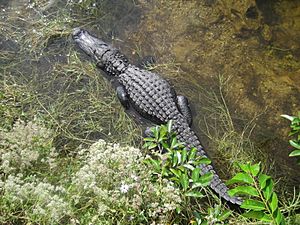 Alligator sunning below the boardwalk at the Oasis Visitor Center

Twelve campgrounds in Big Cypress are tailored to motor vehicles, where tourists planning overnight stays can park their vehicles and ORVs in designated areas. The southern terminus of the Florida National Scenic Trail is located in Big Cypress, and provides hiking opportunities during the winter months. For nature lovers who don't mind getting their feet wet, hiking throughout Big Cypress is enjoyable in all seasons, with most of the cypress country more hospitable to hikers than the dense sawgrass prairies of the central Everglades. Some of the most beautiful wading and walking can be found in cypress strands and prairies between the Loop Road and the Tamiami Trail.

Because alligators are numerous and often large, wading through the cypress country requires constant alertness. The preserve's visitor center offers an educational video about the surroundings. Rangers often lead hikes in the dry winter months, as well as canoe trips and bicycle tours.

Hunting is a long-established recreational activity in the area and is protected in the preserve's charter. Hunters were instrumental in protecting this corner of remote, wild Florida. Hunting activities continue today and include seasons for archery, muzzle loading and general gun. Typical game species are white-tailed deer, turkey and hogs. Alligator hunting is not allowed within the national preserve. Hunting within the preserve is managed cooperatively between the National Park Service and the Florida Fish and Wildlife Conservation Commission.

All content from Kiddle encyclopedia articles (including the article images and facts) can be freely used under Attribution-ShareAlike license, unless stated otherwise. Cite this article:
Big Cypress National Preserve Facts for Kids. Kiddle Encyclopedia.