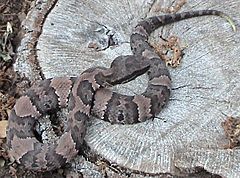 Agkistrodon piscivorus leucostoma is a stout snake with a thick, muscular body. It is the smallest of the three subspecies of A. piscivorus. The average length of mature specimens is 27.5 inches (69.9 cm), while the maximum reported length is 62 inches (157.5 cm).

It is usually dark gray or brown with little or no markings, although a dorsal color pattern consisting of 10 to 15 dark crossbands can be seen in some specimens. Like other members of the species, its color darkens with age, and very old specimens may appear entirely black. Unlike the other two subspecies (A. p. conanti and A. p. piscivorus), the light line that borders the dark cheek strip is usually not present in this subspecies. The dorsal scales are keeled, in rows of 25 near the midbody, and the anal scale is undivided. Its broad, flat head is distinctly wider than its neck, and it has an elliptical (cat-like) pupil. By day the pupil appears as a narrow slit; at night the pupil is wide and may even look round.

The animal opens its mouth widely when startled, exposing the whitish-colored oral mucosa; this is the reason it is commonly referred to as the "cottonmouth."

Found in the United States, from southern Alabama along coast of the Gulf of Mexico, including many offshore islands, to southeastern and central Texas and north to Oklahoma, Missouri, Illinois, Indiana, and southeastern Nebraska, and western Kentucky The type locality given is "western district of Tennessee." Schmidt (1953) proposed that this be amended to "10 miles northeast of Bolivar, Hardeman County, Tennessee."

All content from Kiddle encyclopedia articles (including the article images and facts) can be freely used under Attribution-ShareAlike license, unless stated otherwise. Cite this article:
Agkistrodon piscivorus leucostoma Facts for Kids. Kiddle Encyclopedia.