Aglais milberti, the fire-rim tortoiseshell or Milbert's tortoiseshell, is considered the only species of the proposed Aglais genus that occurs in North America. 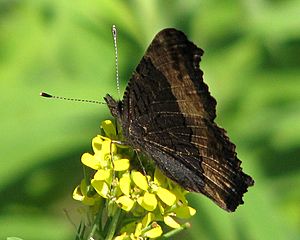 The wingspan is between 4.2 and 6.3 cm and the forewing's tips are squared off. The upperside is black with wide orange submarginal bands; this orange slightly fades to yellow near the inner edge. Both wings have narrow black marginal borders; the hindwing may have blue spots.

This is a quick species that flits rapidly around woodland roads. When it lands it may open its wings, often on trees or rocks.

Milbert's tortoiseshell's range includes all of Canada and Alaska south of the tundra, all of the western United States and most of the eastern United States. In these areas they commonly occur in wet areas, including moist pastures, marshes, most trails, and roadsides.

There are two broods from May to October. During this time adults mate and lay eggs. The female will lay her eggs in bunches of up to 900 individuals on the underside of the host plant's leaves. Early-instar caterpillars eat together in a web, but later instars feed alone. They hibernate as adults, often in small congregations. Adults have been known to mate in low-elevation watercourses in arid regions. 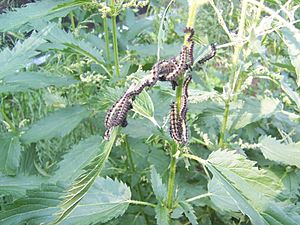 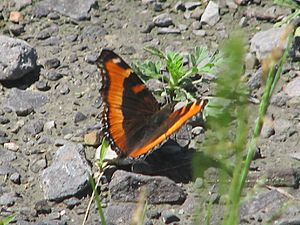 All content from Kiddle encyclopedia articles (including the article images and facts) can be freely used under Attribution-ShareAlike license, unless stated otherwise. Cite this article:
Aglais milberti Facts for Kids. Kiddle Encyclopedia.