Agniya was born Gitel Leybovna Volova in Moscow to a Russian Jewish family. Her father, Lev Nikolaevich Volov, was a veterinarian, and her mother, Maria (née Blokh), was from Kaunas, Lithuania. Agniya studied at a ballet school. She liked poetry and soon started to write her own, trying to imitate Anna Akhmatova and Vladimir Mayakovsky. She read her poetry at the graduation ceremony from the ballet school. Among the guests was the Minister of Education Anatoly Lunacharsky who remarked that instead of becoming a ballerina she should be a professional poet. According to legend, despite the fact that all of Barto's poetry at that time was about love and revolution, Lunacharsky predicted that she would become a famous children's poet.

Agniya married Italian-Russian electrical engineer and poet Pavel Barto. Some of her children's poems were published under two names: Agniya Barto and Pavel Barto. In 1925 she published her first books: Chinese boy Wan-Lin (Китайчонок Ван-Линь) and Mishka the Petty Thief (Мишка-Воришка). Subsequently, she published The First of May (Первое мая), 1926 and Brothers (Братишки), 1928 which received a positive review from Korney Chukovsky. After publishing a book of poetic miniatures for toddlers entitled Toys (Игрушки) in 1936, she suddenly became one of the most popular children's authors, with millions of published copies. 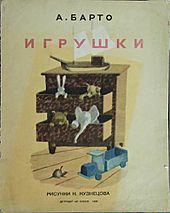 During World War II. she wrote patriotic anti-Nazi poetry, often directly addressed to the leader of the Soviet people, Joseph Stalin. She also worked as a Western Front correspondent for the newspaper Komsomolskaya Pravda. In 1949, she was awarded the Stalin Prize for her book Poetry for Children.

During the 1960s, Barto worked in an orphanage that inspired her to write the poem Zvenigorod (Звенигород, written in 1947, first published in 1966). For nine years, Barto was the anchor of the radio program Find a Person (Найти человека), which helped people find family members lost during World War II. During that time she helped to reunite no fewer than a thousand families. She wrote a book about it in 1966. In 1977, she published Translations from the Children's Language (Переводы с детского) composed of her translations of poetry written by children of different countries. She died in Moscow in 1981.

Awards and other recognition

All content from Kiddle encyclopedia articles (including the article images and facts) can be freely used under Attribution-ShareAlike license, unless stated otherwise. Cite this article:
Agniya Barto Facts for Kids. Kiddle Encyclopedia.