His reign represented the start of a new era in Brunei. The discovery of oil changed the whole course of Brunei's history and enabled faster development in all sectors of the country. The expansion and improvement of formal education and his encouragement of religious education were some of his additional contributions to Brunei Darussalam.

He received his early education in the palace. One of the teachers who had been assigned to teach him was Cikgu Salleh Haji Masri. Salleh Haji Masri was one of the famous freedom fighters with anti-colonial sentiments. The Sultan's relationship with Salleh was close. He was not the only one learning, as there were also the sons of the chiefs of state who accompanied him.

In those days, it had become tradition that the royal family would receive their early education at the Palace to adapt themselves to the knowledge of modern education before they step into the realm of a more formal schooling. In contrast to him, he did not enter formal schooling because of the influence of the royal custom that is still strong at that time, which did not allow him to learn along with the common people despite the fact that the system of modern education was started in Brunei since 1914.

In terms of religious education, since early childhood, he was educated in a variety of knowledge about the religion of Islam. His parents had also invited scholars and intellectuals in the Palace of religious knowledge to teach the royal family in reading the Quran and everything related to religion.

Accession to the throne

The ceremony was attended by the British Resident in Brunei at that time, Mr. E.E.F. Pretty.

He sailed for England in 1932. Before that, he had learned English from Mr. H.F. Stalley. He was in England for a year to learn the English language and a description of the western civilisation. He was the first Sultan in history to explore the western world more than his father, who had only sailed to Singapore and Labuan.

Sultan Ahmad Tajuddin was married to Tengku Raihani, the eldest daughter of Sultan Alaeddin Sulaiman Shah of Selangor on 30 April 1934, when he was 20 years old. Tengku Raihani was crowned as Tengku Ampuan of Brunei on 17 March 1940. In conjunction with his wedding ceremony, he has ordered a new palace to be built and named Istana Mahkota Khairani, where he and his wife lived. He also intended to change the name of Brunei Mosque to Ahmedia Mosque. However, upon completion of his wedding ceremony, a new palace was named Istana Mahkota and Brunei Mosque retained its name.

Before he married Tengku Ampuan Raihani, he was already married with Kadayang Amas (Maskaton) binti Ampuan Salleh, who came from an ordinary family, from Kampong Sultan Lama. They were blessed with 3 daughters,

As he did not have a son, he had taken two adopted sons. They were,

The grandsons and granddaughters of Sultan Ahmad Tajuddin from this marriage;

Some of the Great grandsons and granddaughters of Sultan Ahmad Tajuddin;

The coronation of Ahmad Tajuddin as Sultan and Yang Di Pertuan Negara was held on 17 March 1940. Before that, he appointed and bestowed titles to the chiefs of the country, particularly to those who served the country. In conjunction with his coronation ceremony, King George VI bestowed on him The Order of Saint Michael and Saint George (CMG), as suggested by Sir Shenton Thomas, the High Commissioner for the Malay States to the British Government.

A few days after completion of the coronation ceremony, the Sultan and the royal family visited Singapore, Johore, Kuala Lumpur, Selangor and Penang. 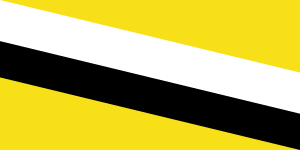 It was during the reign of Sultan Ahmad Tajuddin that saw Brunei Darussalam having its own national anthem "Allah Peliharakan Sultan", which is the likeness of "God Save the King" in England. In 1947, the national anthem was composed by Awang Haji Besar bin Sagap and lyrics written by Pengiran Setia Negara Pengiran Haji Mohammad Yusuf bin Pengiran Haji Abdul Rahim.

The Japanese Occupation in Brunei 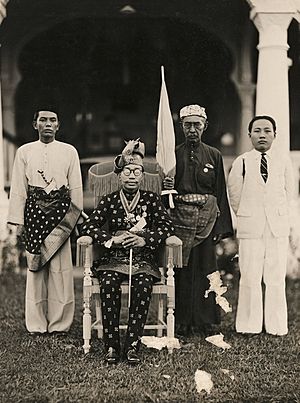 Sultan Ahmad Tajuddin and members of his court, 20 April 1941.

With the likelihood of war with Japan increasing, in 1941, the British began to encourage the establishment of local defence forces in Brunei, and neighbouring Sarawak and Borneo. Sultan Ahmad Tajuddin approved the establishment of the Brunei Volunteer Force and Special Police Force to assist the British in stopping the Japanese invasion of Brunei. An estimated 200 Bruneians initially volunteered, but by the time of the invasion few remained and no Allied troops were stationed in Brunei. The Sultan was appointed an Honorary Colonel of the force.

After the surrender to the Japanese in December 1941, Sultan Ahmad Tajuddin was forced to hand over his powers to the Japanese occupation army. The Japanese continued to recognise the Sultan as the head of the Islamic religion and the Royal Customs so long as he co-operated with them. He was advised by the Japanese to retire and offered a monthly pension together with medals of honour from the Emperor of Japan. 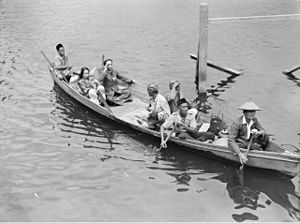 Sultan Ahmad Tajuddin together with his wife and party in a perahu after their journey from the village of Tentayer, whence they fled during the bombing of Brunei.

By mid-1945, the Japanese were facing defeat and their forces in Brunei were becoming more violent in their actions toward the populace. A plan was made to save the Sultan and the royal family from this increased Japanese military violence. Sultan Ahmad Tajuddin and the royal family, together with loyal palace officials, were hidden by Kasim bin Tamin, the village headman of Tantaya.

A small palace had been built in Tantaya and the Sultan lived there for about three months until Brunei was retaken by the Australian army. The palace was guarded by the villagers to prevent any surprise attack by the Japanese. While the Sultan was in Tantaya, he lived like an ordinary citizen. He liked to eat Pulut Mangat which was often given to him by Kasim.

After the Japanese surrender, the Sultan and the royal family returned to Brunei Town from Tantaya on Thursday at about 3:00 am. He was immediately taken to the British Army Headquarters at Bubongan Dua Belas, Residency Road. From here, he went to Istana Parit, KM2, Jalan Tutong.

When Sultan Ahmad Tajuddin made a stopover in Singapore en route to the United Kingdom, he fell ill and was admitted to the Singapore General Hospital on 3 June 1950. He arrived at the hospital accompanied by Mr. Malcolm MacDonald, the British Commissioner-General for Southeast Asia. According to Dr. Monteiro who treated him, the Sultan’s deteriorating health meant that his departure to London should either be postponed or cancelled. The Sultan had bleeding in the stomach and required a blood transfusion. He later went into a coma and died a few hours later on 4 June 1950 after his body failed to respond to the blood transfusions.

When news of his death spread, the Crown Prince of Johore, Tengku Ismail went to Singapore General Hospital, to bring the body of the late sultan to Istana Besar, Johore Bahru. As a sign of respect, the Singaporean government declared all government buildings in Singapore to fly the flag at half mast for two days. In Johore Bahru, his body was washed and covered with white cloth by Syed Salim bin Syed Hasan, the Chief Qadhi of Johore while the funeral prayer, led by the Mufti of Johore, Syed Alwi Al-Hadad. Upon completion of his funeral, his body was laid in state at the foyer of the Grand Palace of Johore Bahru, to provide opportunities for national dignitaries, senior government officials and local community leaders from different ethnic and religious, to pay their respects to the late monarch and send their condolences to his wife. They include:

On 5 June 1950, his coffin was taken to Kallang Airport to be flown to Labuan with the British Royal Air Force, RAF Dakota, accompanied by his wife and the royal family. Before the plane took off to Labuan, many national dignitaries and foreign ambassadors, present at the Airport, to pay their respects to the late king. Among them were;

In the state of Kelantan, all government departments, have been directed flying the flag at half mast for three days in a row, as a sign of mourning over his death. Meanwhile, in Penang, most merchant ships were ordered to fly the flag at half mast on Monday, 5 June 1950. As soon as the plane that carried his coffin arrived at Labuan Airport, it was met with a parade of honour, composed of members of the Police Force to pay their respects to the late Sultan. His coffin was then taken to the jetty to be brought to Brunei by ship.

Before the interment ceremony, on 6 June 1950, his brother, Pengiran Bendahara Seri Maharaja Permaisuara Pengiran Muda Omar Ali Saifuddien, was installed as the 28th Sultan of Brunei. The coffin was carried out of the Palace and headed to the Royal Mausoleum, accompanied by his younger brother, the new sultan, the royal family, dignitaries of the country, and the people, to be laid to rest at the Royal Mausoleum. His Highness was laid to rest beside his father, Sultan Muhammad Jamalul Alam II and his grandfather, Sultan Hashim Jalilul Alam Aqamaddin.

He was one of the most colourful personages whom I have ever met and we had many interesting times together. I shall always miss his lively personality of future visits to Brunei. He was the scion of an ancient royal house. For centuries it has ruled the State of Brunei which is historic and of great importance in the annals of South East Asia. Today our sympathy goes out to the late Sultan's consort and family and to his people who mourn his passing.

—Letter from Malcolm MacDonald to the British Resident in Brunei, 5 June 1950

After his death, his wife and daughter, settled in Kuching, before returning to Selangor. In 1960, Sultan Omar Ali Saifuddien III was informed by the Sultan of Selangor, Sultan Hisamuddin Alam Shah, that Tengku Ampuan Raihani would marry Raja Kamaluddin bin Raja Haji Harun, a member of Perak's royal family. He stated that if Tengku Ampuan Raihani was to be married to someone else, then she can no longer wear the Royal Regalia, and her monthly allowance will be terminated. Tengku Ampuan Raihani died in mid-1990.

Places named after him

Sekolah Rendah Ahmad Tajuddin, a primary school in Kuala Belait was named after the Sultan.

All content from Kiddle encyclopedia articles (including the article images and facts) can be freely used under Attribution-ShareAlike license, unless stated otherwise. Cite this article:
Ahmad Tajuddin Facts for Kids. Kiddle Encyclopedia.