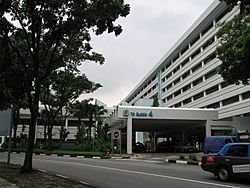 The hospital was established in 1821, when the first General Hospital was located in the cantonment for British troops near the Singapore River. The hospital moved several times before settling down at Sepoy Lines along Outram Road in 1882.

Modern history of the hospital began on 29 March 1926, with the opening of 800 beds. Today, only the Bowyer Block with its historically distinctive clock tower remains. The Bowyer Block is now home to the The SGH Museum.

In the 1990's, the hospital was rebuilt and restructured to modernise the organisation of the hospital. The campus now houses its current 8-block complex housing in-patient wards, ambulatory and support services, research laboratories and a postgraduate medical institute.

The SGH Museum was officially opened by President S. R. Nathan on 20 May 2005. It is a repository of artefacts and records, where the long and rich history of the hospital can be traced. One can also learn about the development of medical specialties and medical education in Singapore at the museum.

In 2015, 22 patients in the renal ward were infected with Hepatitis C and 8 out of which died in the outbreak.

All content from Kiddle encyclopedia articles (including the article images and facts) can be freely used under Attribution-ShareAlike license, unless stated otherwise. Cite this article:
Singapore General Hospital Facts for Kids. Kiddle Encyclopedia.