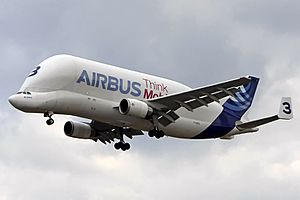 The Airbus A300-600ST is a civil aircraft. It is a bigger cargo aircraft variant of the A300. Only five were built. It's also known as Beluga.

Airbus A300-600ST is used to transport parts of Airbus aircraft between all manufacturers of the group. All are registered in France.

All content from Kiddle encyclopedia articles (including the article images and facts) can be freely used under Attribution-ShareAlike license, unless stated otherwise. Cite this article:
Airbus A300-600ST Facts for Kids. Kiddle Encyclopedia.