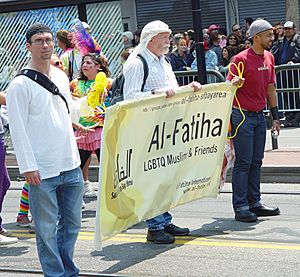 Members of Al Fatiha at the LGBT Pride parade in San Francisco 2008.

The organization grew out of an internet listserve that brought together many gay, lesbian, and questioning Muslims from 25 countries, and by 1998 had developed numerous in-person chapters. Al-Fatiha has 14 chapters in the United States, as well as offices in England, Canada, Spain, Turkey, and South Africa.

The name means "the Opening" and is shared with Al-Fatiha or the first surah of the Qur'an. In the beginning of that surah, Allah is described as compassionate and merciful; the organization's founders believe that these attributes characterize Islam, rather than hatred and homophobia.

Each year, Al-Fatiha hosts an international membership retreat and conference. Early conferences took place in Boston, New York, and London in the late 1990s and early 2000s, and focused on issues such as the reconciliation of religion and sexual orientation.

All content from Kiddle encyclopedia articles (including the article images and facts) can be freely used under Attribution-ShareAlike license, unless stated otherwise. Cite this article:
Al-Fatiha Foundation Facts for Kids. Kiddle Encyclopedia.