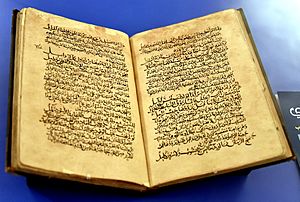 Abū al-Ṭayyib Aḥmad ibn Al-Ḥusayn Al-Mutanabbī Al-Kindī (أبو الطيب أحمد بن الحسين المتنبّي الكندي) (c. 915 – 23 September 965 CE) from al-Kūfah, Abbasid Caliphate, was a famous ‘Abbāsid Arab poet at the court of Sayf al-Dawla in Aleppo, and for whom he composed 300 folios of poetry. As one of the greatest, most prominent and influential poets in the Arabic language, much of his work has been translated into over 20 languages worldwide. His poetry largely revolves around praising the kings he visited during his lifetime. He started writing poetry when he was nine years old. He is well known for his sharp intelligence and wittiness. Al-Mutanabbi had great pride in himself through his poetry. Among the topics he discussed were courage, the philosophy of life, and the description of battles. Many of his poems were and still are widely spread in today's Arab world and are considered to be proverbial. His great talent brought him very close to many leaders of his time. He praised those leaders and kings in return for money and gifts. His poetic style earned him great popularity in his time.

Al-Mutanabbi was born in the Iraqi city of Kufah, 915. His father claimed descent from the South Arabian tribe of Banu Ju'fa. His last name, Al-Kindī, was attributed to the district he was born. Owing to his poetic talent, and claiming predecession of prophet Saleh, al-Mutanabbi received an education in Damascus, Syria. When Shi'ite Qarmatians sacked Kufah in 924, he joined them and lived among the Banu Kalb and other Bedouin tribes. Learning their doctrines and dialect, he had many followers, and even claimed to be a Nabi (نَـبِي, Prophet) — hence the name Al-Mutanabbi ("The Would-be Prophet") — he led a Qarmatian revolt in Syria in 932. After its suppression and two years of imprisonment by the Ikhshid governor of Hims, he recanted in 935 and became a wandering poet. During this period he began writing his first known poems. Political ambition to be a Wali led al-Mutanabbi to the courts of Sayf al-Dawla and Abu al-Misk Kafur but in this ambition he failed.

Al-Mutanabbi lived at the time when the Abbasid Caliphate started coming apart, many of the states in the Islamic world became politically and militarily independent from the weak Abbasid Caliphate. Chief among those states was the Emirate of Aleppo.

Al-Mutanabbi joined the court of Abu al-Misk Kafur after parting ways with Saif al Dawla, but Kafur dismissed Al-Mutanabbi's intentions claiming them to be a threat to his position. Al-Mutanabbi realized that his hopes of becoming a statesman were not going to be materialized and he left Egypt in c. 960. After he left, he heavily criticized Abu al-Misk Kafur with satirical odes. 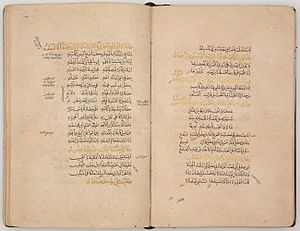 Diwan of the poetry of Al-Mutanabbi from early 14th century Iran, Khalili Collection of Islamic Art 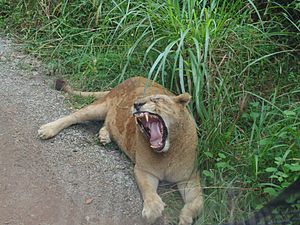 A lion (likely female) with its canines out.

Mutanabbi's egomaniacal nature seems to have got him in trouble several times and might be why he was killed. This can be seen in his poetry, which is often conceited:

Al-Mutanabbi was killed because one of his poems contained a great insult to a man called "Ḍabbah al-Asadī" (Arabic: ضبّة الأسدي‎code: ar is deprecated ). Dabbah, along with his uncle Fāṫik al-Asadī (Arabic: فاتك الأسدي‎code: ar is deprecated ), managed to intercept al-Mutanabbi, his son Muḥassad (محسّد), and his servant near Baghdad. Ibn Rachik reported that when al-Mutanabbi had the chance to flee, the attackers recited some of the bold verses he wrote relating to courage, and he was forced to live up to them; he fought, and died along with his companions in 965. 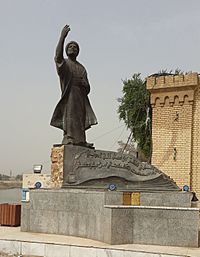 All content from Kiddle encyclopedia articles (including the article images and facts) can be freely used under Attribution-ShareAlike license, unless stated otherwise. Cite this article:
Al-Mutanabbi Facts for Kids. Kiddle Encyclopedia.