The Al-Rashid Mosque was the first mosque built in Canada. It was constructed in Edmonton, Alberta. 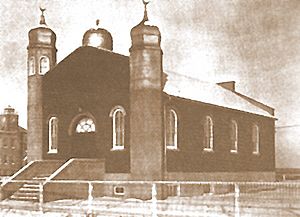 Al-Rashid Mosque at its opening in 1938

Al-Rashid Mosque was expected to be the first mosque in North America but was built in 1938 just after the Mother Mosque of America in Cedar Rapids, Iowa and several years after the 1929 mosque built in Ross, North Dakota. At the time, there were about 700 Muslims in Canada. Hilwie Hamdon was the first woman to talk to Edmonton Mayor John Fry about purchasing land to construct the mosque. She, along with friends, collected fund from Jews, Christians and Muslims to construct the mosque.

The mosque was built by Ukrainian-Canadian contractor Mike Drewoth in a style resembling the Eastern Christian (Ukrainian Catholic and Orthodox) immigrant churches and opened on December 12, 1938. In the 1940s, the building was relocated from its original site to a location a few blocks away to make room for a school expansion.

By the 1980s, the mosque been outgrown by the booming Muslim community, and had fallen into disrepair. The city, which owned the land on which it was located, was contemplating demolition of the site to expand a hospital. But in 1991, it was decided to move the mosque to Fort Edmonton Park at a cost of $75,000. About a year later on May 28, 1992, it was reopened in the park.

Muhammad Abdul Aleem Siddiqi was instrumental in the development of the mosque.

All content from Kiddle encyclopedia articles (including the article images and facts) can be freely used under Attribution-ShareAlike license, unless stated otherwise. Cite this article:
Al-Rashid Mosque Facts for Kids. Kiddle Encyclopedia.