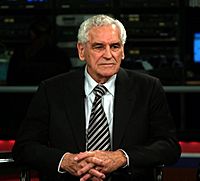 Albert Reinhold Carmichael (November 10, 1928 – September 7, 2019) was an American football player and stuntmen. He was born in Boston, Massachusetts. Carmichael played for the Green Bay Packers of the National Football League between 1953 and 1958 and then he was with the Denver Broncos of the American Football League in 1960 and 1961.

Carmichael died on September 7, 2019 in Palm Dessert, California at the age of 90.

All content from Kiddle encyclopedia articles (including the article images and facts) can be freely used under Attribution-ShareAlike license, unless stated otherwise. Cite this article:
Al Carmichael Facts for Kids. Kiddle Encyclopedia.