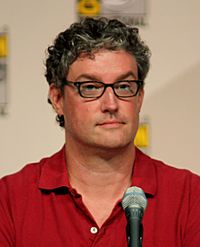 Al Jean (born January 9, 1961 in Farmington Hills, Michigan) is an American television comedy writer best known for his work on The Simpsons. He has been showrunning (managing) The Simpsons since season 13.

All content from Kiddle encyclopedia articles (including the article images and facts) can be freely used under Attribution-ShareAlike license, unless stated otherwise. Cite this article:
Al Jean Facts for Kids. Kiddle Encyclopedia.