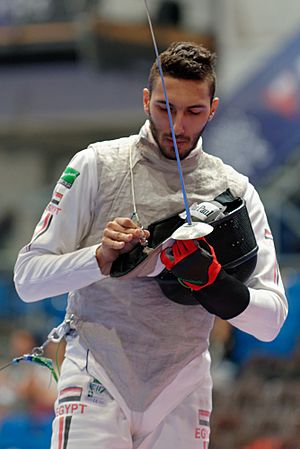 Alaaeldin Muhammad Al-Sayid Abouelkassem (Arabic: علاء الدين محمد السيد أبو القاسم; born 25 November 1990) is an Egyptian fencer who won a silver medal in the men's foil event at the 2012 Summer Olympics. He took up fencing at the age of eight and, in 2008, began fencing globally, winning medals at the African and World Junior Championships, as well as the Junior World Cup, before advancing to the senior level in 2011 and winning bronze at the Fleuret de St-Petersbourg. Later that year he earned gold medals at the 2011 Pan Arab Games in the individual and team foil events before going to the 2012 Summer Games, where he won Egypt's and Africa's first ever Olympic fencing medal.

All content from Kiddle encyclopedia articles (including the article images and facts) can be freely used under Attribution-ShareAlike license, unless stated otherwise. Cite this article:
Alaaeldin Abouelkassem Facts for Kids. Kiddle Encyclopedia.