The Alabama Jazz Hall of Fame (AJHF) was founded in 1978, and opened a museum on September 18, 1993, with a mission "to foster, encourage, educate, and cultivate a general appreciation of the medium of jazz music as a legitimate, original and distinctive art form indigenous to America. Its mission is also to preserve a continued and sustained program of illuminating the contribution of the State of Alabama through its citizens, environment, demographics and lore, and perpetuating the heritage of jazz music." It is located in Birmingham, Alabama, United States. 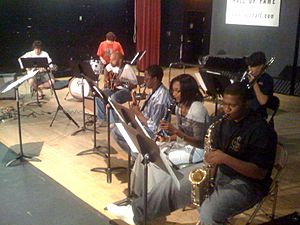 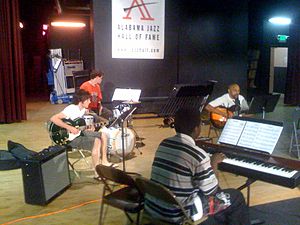 The museum is located in Birmingham's historic Carver Theatre, which is part of the Birmingham Civil Rights District, along with the Birmingham Civil Rights Institute, 16th Street Baptist Church and Kelly Ingram Park. The museum contains more than 2,200 square feet (200 m2) of exhibits. The Jazz Hall of Fame also sponsors jazz performances around the city and brings jazz to many local students with school visits from musicians. It contains memorabilia such as paintings, quilts, instruments, and personal effects of such artists as Ella Fitzgerald and W.C. Handy, and offers a tour guided by Frank Adams.

Every Saturday morning since 1999, the Alabama Jazz Hall of Fame has offered free jazz classes to any resident of the state of Alabama. Founded by Dr. Frank Adams, the classes are taught by local jazz band directors from area schools. In these classes, students learn to read and improvise jazz. Graduates of the AJHF classes have received scholarships to prestigious jazz studies programs, such as the ones offered by the University of New Orleans, the Manhattan School of Music and New School University in New York City.

Every year, the Alabama Jazz Hall of Fame invites middle school, high school and college jazz bands to perform in this annual three-day event. Bands are adjudicated by notable jazz authorities and awards for "Band of Distinction" and "Outstanding Soloist" are made in each of the categories: Middle School, High School, Junior College and College.

Past award recipients at the AJHF Student Jazz Band Festival

College and University Bands of Distinction

There are a number of "spin-off" groups spawned by the educational programs at the Alabama Jazz Hall of Fame. Among these is a group called the "Neo Jazz Collective." A group of young students, exhibiting the skills they learned at the Alabama Jazz Hall of Fame, created this ensemble, with the intention of becoming a professional entity. The group is directed by Lud Yisrael. The group started their own school in Fairfield, Alabama, and is fast becoming a popular "Nu-Jazz" ensemble in the Birmingham area.

During the fall of each year, the "Taste of 4th Avenue Jazz Festival" takes place, jointly sponsored by the Alabama Jazz Hall of Fame and Urban Impact of Birmingham.

Every year, the Alabama Jazz Hall of Fame accepts contributions of used, but repairable, instruments. Numerous instruments have been donated, many by famous musicians such as Lou Marini, Erskine Hawkins, Sammy Lowe and Haywood Henry. These recycled instruments are put to use by students of the AJHF educational programs.

All content from Kiddle encyclopedia articles (including the article images and facts) can be freely used under Attribution-ShareAlike license, unless stated otherwise. Cite this article:
Alabama Jazz Hall of Fame Facts for Kids. Kiddle Encyclopedia.