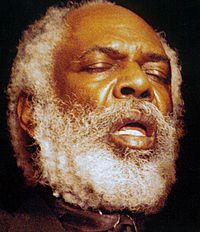 His most famous works were playing with the Ramsey Lewis Trio and the Count Basie Orchestra. His 1975 recording Plenty Good Eaton is considered a classic in the funk music genre. He has been added into both the Alabama Jazz Hall of Fame and the Alabama Music Hall of Fame.

All content from Kiddle encyclopedia articles (including the article images and facts) can be freely used under Attribution-ShareAlike license, unless stated otherwise. Cite this article:
Cleveland Eaton Facts for Kids. Kiddle Encyclopedia.