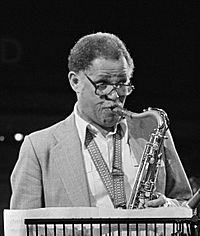 Dexter Gordon (February 27, 1923 – April 25, 1990) was an American jazz tenor saxophonist. He was born in Los Angeles, California. He was also known as "Long Tall Dexter" and "Sophisticated Giant". Gordon's career lasted for over 40 years. He was among the earliest tenor players to adapt the bebop musical language.

Gordon died in Philadelphia, Pennsylvania from renal failure and laryngeal cancer at the age of 67.

All content from Kiddle encyclopedia articles (including the article images and facts) can be freely used under Attribution-ShareAlike license, unless stated otherwise. Cite this article:
Dexter Gordon Facts for Kids. Kiddle Encyclopedia.