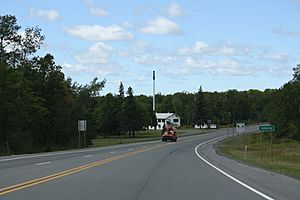 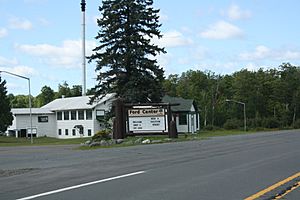 Alberta is the site of the Ford Forestry Center and Research Forest, managed by the Michigan Technological University School of Forest Resources and Environmental Science.

The community was founded in 1936 after Henry Ford declared the banks of the Plumbago Creek to be an ideal spot for a sawmill. Ford named the town "Alberta" after the daughter of one of his executives in the area. According to some sources, this was Edward G. Kingsford, the husband of one of Ford's cousins and for whom both the Kingsford Charcoal Company and Kingsford, Michigan, is named. Other sources indicate it was Fred G. Johnson, superintendent of Ford's Upper Peninsula operations at the time.

At the time Ford established Alberta, wood was used extensively in automobiles. Henry Ford envisioned the town as a model sawmill community; consisting of twelve houses, two schools, and a steam driven mill built to the most modern standards of the day. The Plumbago Creek was dammed to provide a reservoir to serve the town and mill's water supply needs. The mill was a two-story white clapboard wood frame structure and still stands, now housing a portion of the Alberta Village Museum. The saw mill had a capacity of 14,000 board feet (33 m3) per day for hardwood and 20,000 board feet (47 m3) per day for softwood. This was a small capacity even by 1936 standards, with Ford's other three mills in the Upper Peninsula of Michigan producing twenty to twenty-five times as much.

In 1954, Ford Motor Company donated the town of Alberta, Michigan and 1,700 acres (690 ha) of land to what is now the School of Forest Resources and Environmental Science at Michigan Technological University.

Alberta buildings still standing on the property are used as a museum, support research and teaching programs for forestry and ecology majors, and are used by numerous universities from around the United States for forestry education.

All content from Kiddle encyclopedia articles (including the article images and facts) can be freely used under Attribution-ShareAlike license, unless stated otherwise. Cite this article:
Alberta, Michigan Facts for Kids. Kiddle Encyclopedia.