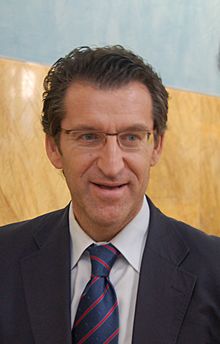 Alberto Núñez Feijoo (born September 10, 1961) is the current president of Galicia. He is the leader of the Galician PP, the main conservative political party which defeated the socialists in the elections of 2009 and again in the elections of 2012. Feijoo is a strong admirer of Manuel Fraga, although he does not govern Galicia in the same manner.

Núñez Feijoo studied law in Santiago de Compostela. He is married to the journalist Carmen Gámir.

All content from Kiddle encyclopedia articles (including the article images and facts) can be freely used under Attribution-ShareAlike license, unless stated otherwise. Cite this article:
Alberto Núñez Feijoo Facts for Kids. Kiddle Encyclopedia.