Alder Creek Grove is a giant sequoia grove located both on private land and within the Giant Sequoia National Monument in the western Sierra Nevada of California. The grove is spread out over approximately 785 acres (318 ha) of land and contains 483 giant sequoias that are at least 25.5 feet in diameter, including the Stagg Tree, the 5th largest tree in the world and one of the oldest known living giant sequoias. Though on private land, the Rouch family made part of their land accessible to the public.

In 1946, much of Alder Creek Grove was purchased by the Rouch family to be logged and developed. The grove was logged in the late 1940s and early 1950s. However, doing so proved to be uneconomical due to the brittle nature of giant sequoia wood, and the regret the family felt logging them. Though about two dozen giant sequoias were cut down, no especially large or old giant sequoias were harmed.

A 236-lot subdivision of mostly summer cabins, called Sequoia Crest, was built next to the grove around the same time so people could visit the Stagg Tree and some of the surrounding giant sequoias. A short-lived ski resort was also established to make the land more profitable for the Rouch family.

On September 17, 2019, the Save the Redwoods League announced it had agreed to pay the Rouch family $15.6 million by December 31 to formally protect the giant sequoias growing on their land, including the Stagg Tree. Once the deal is finalized, the League plans to spend another $4.75 million on ecosystem studies and restoration work before handing the grove over to the U.S. Forest Service to be incorporated into Giant Sequoia National Monument. It will then become the largest giant sequoia on land managed by the U.S. Forest Service, edging out the Boole Tree of Converse Basin Grove, the current largest on forest service land.

On December 31st, 2019 the Alder Creek Sequoia Grove was saved. Over 8,500 donors from all US States and all major continents minus Antarctica donated the 15.6 million dollars through Save the Redwoods League. These funds were raised in a space of less than 6 months. Save the Redwoods League plans to retain the Alder Creek property for a period of 5-10 years. During this time restoration, thinning (not thinning sequoias), and fire will help restore landscape features in this unique sequoia grove. Once complete the Alder Creek property will be transferred to the US Forest Service for inclusion into the Giant Sequoia National Monument.

Alder Creek Grove is remarkably diverse, being made up of trees of many different ages and sizes, from seedlings to 3,000-year-old giants. There are also mature stands of red fir, white fir, ponderosa pine, and sugar pine trees mixed in amongst the giant sequoias. The grove is also home to several meadows, wetlands, and lush riparian woodlands. 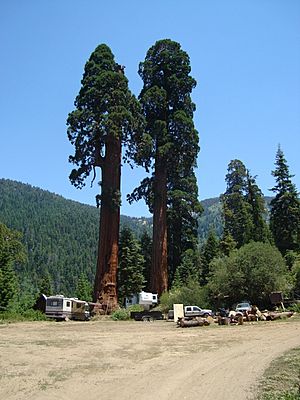 All content from Kiddle encyclopedia articles (including the article images and facts) can be freely used under Attribution-ShareAlike license, unless stated otherwise. Cite this article:
Alder Creek Grove Facts for Kids. Kiddle Encyclopedia.