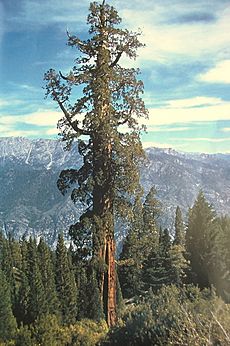 The Boole tree – sixth largest tree in the world 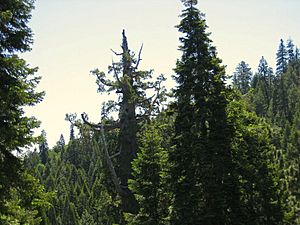 The Boole Tree is a giant sequoia in the Converse Basin Grove of Giant Sequoia National Monument, in the Sierra Nevada, in Fresno County, California.

The grove, in the monument managed by Sequoia National Forest, is 5 miles (8 km) from the General Grant Grove in Kings Canyon National Park. Converse Basin used to be a large grove, but was logged of most of its giant sequoias between 1892 and 1918. Now only perhaps 60–100 large specimens survive out of thousands. However, this grove is still the second largest contiguous grove in the world.

The Boole Tree, by far the largest giant sequoia in Converse Basin Grove, was named around 1895 by A.H. Sweeny, a Fresno doctor, after Franklin A. Boole, a supervisor of the logging operation who spared the tree due to its great size. Before 1931, it was thought by many to be the largest tree in the world (although the General Grant Tree was more popularly known as the largest tree in the world at that time), but it is now known as the sixth largest tree, after five other giant sequoias: the General Sherman tree, the General Grant, the President tree, the Lincoln tree, and the Stagg tree.

Boole features the largest footprint of any living giant sequoia, measuring 113 ft (34 m) in circumference at the base.

All content from Kiddle encyclopedia articles (including the article images and facts) can be freely used under Attribution-ShareAlike license, unless stated otherwise. Cite this article:
Boole (tree) Facts for Kids. Kiddle Encyclopedia.