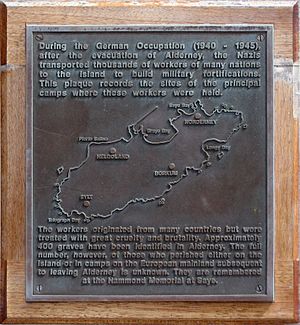 Map of Alderney and the camp-sites

The Alderney concentration camps were built and operated by Nazi Germany during its World War II occupation of the Channel Islands. The Channel Islands were the only British Commonwealth soil to be occupied by the Nazis. The Nazis built four concentration camps on Alderney Island, subcamps of the Neuengamme camp outside Hamburg. They were named after the Frisian Islands: Lager Norderney, Lager Borkum, Lager Sylt and Lager Helgoland. The Nazi Organisation Todt operated each subcamp and used forced labour to build bunkers, gun emplacements, air-raid shelters, and concrete fortifications. The camps started working in January 1942 and had a total inmate population of about 6,000.

The Borkum and Helgoland camps were "volunteer" (Hilfswillige) labour camps and the labourers in those camps were treated harshly but a little bit better than the inmates at the Sylt and Norderney camps. The prisoners in Lager Sylt and Lager Norderney were slave labourers forced to build the many military fortifications and installations throughout Alderney. Sylt camp held Jewish enforced labourers. Norderney camp housed European (usually Eastern but including Spaniard) and Russian enforced labourers. Lager Borkum was used for German technicians and "volunteers" from different countries of Europe. Lager Helgoland was filled with Russian Organisation Todt workers.

In 1942, Lager Norderney, containing Russian and Polish POWs, and Lager Sylt, holding Jews, were placed under the control of the SS Hauptsturmführer Max List. Over 700 of the inmates lost their lives before the camps were closed and the remaining inmates transferred to Nazi Germany in 1944.

All content from Kiddle encyclopedia articles (including the article images and facts) can be freely used under Attribution-ShareAlike license, unless stated otherwise. Cite this article:
Alderney concentration camps Facts for Kids. Kiddle Encyclopedia.