Kids Encyclopedia Facts
In this article, the patronymic is Sergeyevich and the family name is Samedov.

Aleksandr Sergeyevich Samedov (Russian: Александр Сергеевич Самедов; IPA: [ɐlʲɪkˈsandr sʲɪrˈɡʲe(j)ɪvʲɪtɕ sɐˈmʲedəf]; Azerbaijani: Aleksandr Səmədov; born 19 July 1984) is a Russian professional football official and a former player who played as a right winger. He works as a scout with FC Lokomotiv Moscow. He has played for the Russia national football team since 2011 and was selected for the 2014 and 2018 FIFA World Cup.

Samedov was born in Moscow, Soviet Union, his father is Azerbaijani and his mother is Russian. He is a Christian and is married to Yuliya. 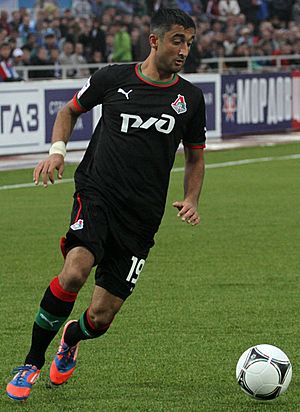 Samedov with Lokomotiv in 2012

He was a student of the Spartak Moscow academy and was considered one of their most talented youngsters. He was a regular in the first team under Nevio Scala but when Aleksandrs Starkovs came he lost his place in the first team. Spartak Moscow then purchased Vladimir Bystrov, and in the summer of 2005 Samedov left for Lokomotiv Moscow for €3.4 million. However, Samedov failed to succeed in Loko, and in 2008 joined FC Moscow. Having shown great progress under direction of Miodrag Božović, he chose to become part of a bigger club and went to Dynamo Moscow during the 2009–10 winter transfer period. On 27 June 2012, Samedov moved to Lokomotiv, where he played earlier. According to the source close to the club, Lokomotiv paid about 8.2 million € for his services.

On 16 January 2017, he returned to FC Spartak Moscow, winning the Russian Premier League title at the end of the season. He was released from his Spartak contract by mutual consent on 5 January 2019.

On 13 January 2019, he signed with Krylia Sovetov Samara.

On 27 October 2019, he retired from football. He restarted his career after Znamya Noginsk was promoted to the third-tier Russian Professional Football League for the 2020–21 season. He retired again in January 2021 and was appointed scout by FC Lokomotiv Moscow. 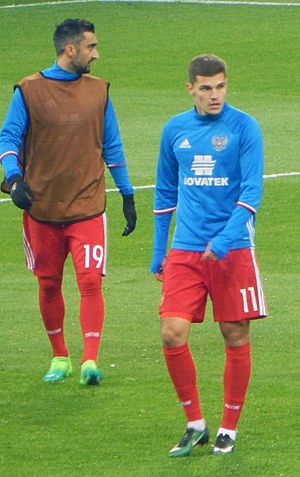 In 2003, Samedov first visited Baku to hold discussions on representing the Azerbaijan national football team. He rejected the offer as it would have meant he had to rescind his Russian passport.

At international level Samedov has played for the Russia U-21s. He was called up to the Russia national football team in late September 2011 for the first time. On 7 October 2011, Samedov made his debut for the senior national team of Russia after coming on as a last-minute substitute for Alan Dzagoev in the 1–0 away win against Slovakia in a Euro 2012 qualifier.

All content from Kiddle encyclopedia articles (including the article images and facts) can be freely used under Attribution-ShareAlike license, unless stated otherwise. Cite this article:
Aleksandr Samedov Facts for Kids. Kiddle Encyclopedia.