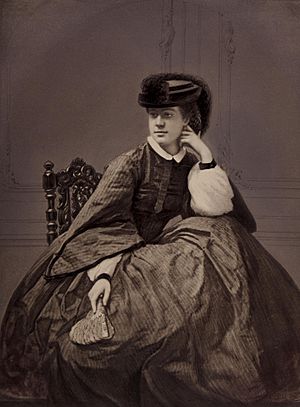 Alexandrine Petronella Francina Tinne (October 17, 1835 – August 1, 1869) was a Dutch explorer. She used her money to satisfy her curiosity about Africa. Her father died when she was ten, and she became one of the richest people in the Netherlands. Tinne is said to have been beautiful, and she was very clever. She knew several languages and was good at riding horses. She was also brave and firm. 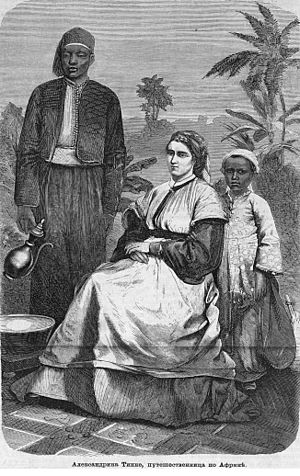 With her mother and several scientists, Tinne first travelled down the Nile in 1863. Because of the trip, she gathered lots of scientific information, but Tinne's mother and two of the scientists died. Later, she prepared another trip across the Sahara. She took two big iron tanks of water. The Muslim people, thinking that the tanks had gold inside, attacked Tinne. They cut her with their swords, cutting off her hand so she could not use her gun. The attackers then ran away, leaving her to bleed to death. She died alone in the desert.

The church built in her memory in her hometown, The Hague, was destroyed by bombs in World War I.

All content from Kiddle encyclopedia articles (including the article images and facts) can be freely used under Attribution-ShareAlike license, unless stated otherwise. Cite this article:
Alexandrine Tinné Facts for Kids. Kiddle Encyclopedia.