Alexei Vyacheslavovich Emelin (Russian: Алексей Вячеславович Емелин; born 25 April 1986) is a Russian professional ice hockey defenceman for Avangard Omsk of the Kontinental Hockey League (KHL). Emelin was drafted by the Montreal Canadiens in the third round, 84th overall, of the 2004 NHL Entry Draft.

Emelin spent a large portion of his career with Lada Togliatti in the Russian Superleague (RSL) before signing with Ak Bars Kazan. He was also a member of Russia's under-18 and under-20 national squads, and has also become a regular member of the senior national team, skating for both in EuroTour and the World Championships.

In a Kontinental Hockey League (KHL) game in 2009, Emelin sustained a face injury during a fight with Alexander Svitov; an orbital bone shattered and had to be rebuilt with metal plate. He has tried to avoid getting into fights ever since the incident. 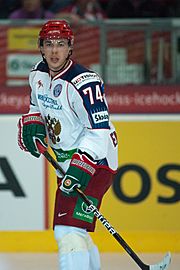 Emelin playing for Russia in 2011 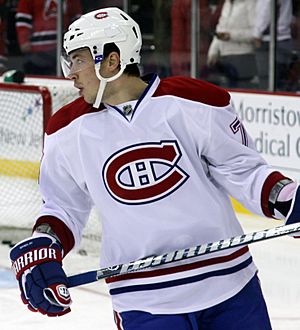 Emelin with the Montreal Canadiens in 2012

During the lockout shortened 2012–13 season, Emelin established himself as a key member of the Canadiens' defensive core, often playing with fellow countryman Andrei Markov. He scored three goals and 12 points in 38 games for the Canadiens and finished with a plus-minus rating of +2. His season, however, was derailed by an injury during a game against the Boston Bruins on 6 April 2013, when Emelin collided with Bruins forward Milan Lucic, falling awkwardly and tearing a ligament in his left knee. As a result, Emelin missed the remainder of the regular season and the playoffs. On 31 October 2013, he signed a four-year contract extension with Montreal, lasting through the 2017–18 season.

After his sixth season with the Canadiens, Emelin was left exposed at the 2017 NHL Expansion Draft. He was selected by the Vegas Golden Knights on 21 June 2017. On 1 July 2017, the Golden Knights traded Emelin to the Nashville Predators in exchange for a third-round pick in the 2019 NHL Entry Draft. Vegas retained approximately $1.2 million USD of Emelin's salary in the trade. Emelin skated in 76 games with the Predators in his lone season with the club, as well as 10 postseason games.

On 2 September 2018, Emelin returned as a free agent to the KHL, signing a three-year contract with Avangard Omsk.

All content from Kiddle encyclopedia articles (including the article images and facts) can be freely used under Attribution-ShareAlike license, unless stated otherwise. Cite this article:
Alexei Emelin Facts for Kids. Kiddle Encyclopedia.