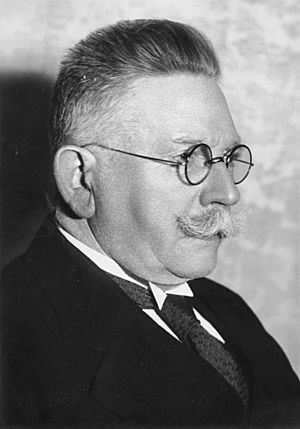 Alfred Wilhelm Franz Maria Hugenberg (19 June 1865 in Hanover - 12 March 1951 in Kükenbruch) was a German businessman and politician. He was also a member of Hitler's Cabinet in 1933. In 1933, he was the minister of food in Germany.

Hugenberg was heading the German National People's Party (DNVP). During the period of the Weimar Republic and Nazi Germany he was a member of the Reichstag.

All content from Kiddle encyclopedia articles (including the article images and facts) can be freely used under Attribution-ShareAlike license, unless stated otherwise. Cite this article:
Alfred Hugenberg Facts for Kids. Kiddle Encyclopedia.