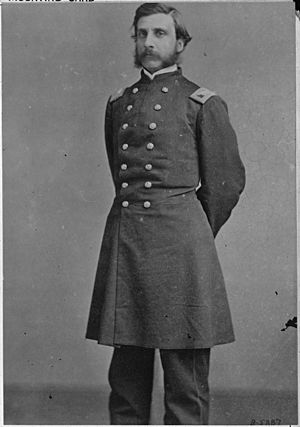 On April 13, 1858, Wood was commissioned as colonel of the 14th New York Militia (14th Brooklyn), a local antebellum militia regiment.

When the Civil War erupted, Wood enlisted at the age of 35 on April 4, 1861, in Brooklyn, New York, to serve three years. He was wounded and captured on July 21, 1861, at the First Battle of Manassas, exchanged for a Confederate colonel and returned to field duty. Because of his wounds received at the battle of First Bull Run he was discharged for disability on October 18, 1861. After the war Alfred Wood became very involved in the post war affairs of his beloved 14th Brooklyn helping the veterans of the unit. He also became Mayor of Brooklyn, 1864–1865.

All content from Kiddle encyclopedia articles (including the article images and facts) can be freely used under Attribution-ShareAlike license, unless stated otherwise. Cite this article:
Alfred M. Wood Facts for Kids. Kiddle Encyclopedia.