Kids Encyclopedia Facts
In this Indonesian name, there is no family name nor a patronymic.

Muhammad Ali Syarief was born in Jakarta, Indonesia, on 26 October 1996. He is the fourth child of four siblings of Syarief Alkatiri and Tengku Resi Revado. Syarief began his career in entertainment at the age of 12 with a part as an extra in the TV movie Si Gundul Bocah Petir. His mother was one of the actresses. In Ganteng Ganteng Serigala, he played the role of a vampire. He became popular in feature films with the release of Garuda di Dadaku 2 in 2011. In addition to his movie roles, Ali has also had roles in soap operas, playing in Bara Bere and ABG Jadi Manten.

In 2015, he joined the musical group The Freaks, which also includes Nikita Willy, Teuku Rassya, and Calvin Jeremy. Their single "Jatuh Cinta Tak Ada Logika", a collaboration with Agnez Mo is a mash-up of her two songs "Ku T'lah Jatuh Cinta" and "Tak Ada Logika". 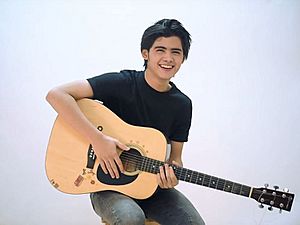 All content from Kiddle encyclopedia articles (including the article images and facts) can be freely used under Attribution-ShareAlike license, unless stated otherwise. Cite this article:
Aliando Syarief Facts for Kids. Kiddle Encyclopedia.