The Alice Austen House, also known as Clear Comfort, is located at 2 Hylan Boulevard in the Rosebank section of Staten Island, New York City, New York. It was home of Alice Austen, a photographer, for most of her lifetime, and is now a museum and a member of the Historic House Trust. The house is administered by the "Friends of Alice Austen", a volunteer group. Today, the Alice Austen House hosts many school programs, including photography summer camps and day trips for classes of all age groups. 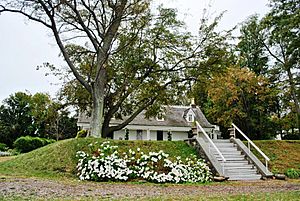 View of the house from the beach 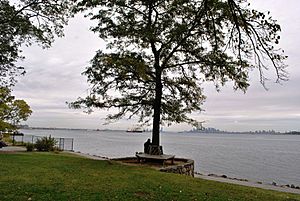 It was originally built in the 1690s/early 1700s as a one-room Dutch Colonial House on the shore of New York harbor, near the Narrows with brothers Jacob Johnson and Lambert Johnson being the likely first occupants. The brothers Johnson purchased 120 acres of land from George Brown in 1698. Jacob Johnson's mother-in-law was Winifred King Benham, who was tried for witchcraft in Wallingford, Connecticut, and may have been a resident of the house after her acquittal and virtual banishment.

The house was remodeled and expanded several times in the 1800s, most notably after John Haggerty Austen, Alice's grandfather, purchased, renamed, and remodeled it in 1844.

Alice Austen House participates as a museum in the Smithsonian program of Museum Day events. In 2016 Austen House presented its first juried triennial exhibition, Staten Island Unlimited featuring 35 photographers from three boroughs of New York. During the members' preview reception of the show, a toast was made to Alice Austen's 150th birthday. Other activities included Triennial Talks, discussions with artists about their work on the subjects of "Staten Island as Place" and "Staten Island as Community." The first Staten Island Unlimited was supported by Macy's, Duggal, and, in part, by public funds from the New York City Department of Cultural Affairs in partnership with the New York City Council.

The Alice Austen House permanent collection of Alice Austen's photography, including many of her documentary photos, is being digitized and presented on the museum's website.

In March 2016, the Whitney Museum hosted New Eyes on Alice Austen, a panel discussion in honor of Women's History Month and Alice Austen's 150th birthday featuring, as reported in American Photo magazine, "scholars, academics, and historians who have investigated her incredible work and unconventional lifestyle." The Whitney program was made possible by the National Endowment for the Humanities: Celebrating 50 Years of Excellence.

An old neighborhood tradition told that, after midnight, one could hear the clanking of chains coming from the cellar. This was attributed to the ghosts of slaves who were kept there during the American Revolution.

All content from Kiddle encyclopedia articles (including the article images and facts) can be freely used under Attribution-ShareAlike license, unless stated otherwise. Cite this article:
Alice Austen House Facts for Kids. Kiddle Encyclopedia.