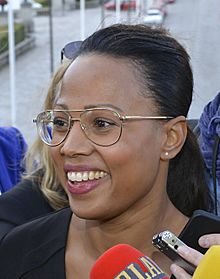 Alice Bah Kuhnke (born Alice Bah 21 December 1971) is a Swedish politician and television presenter. In October 2014, she became the Minister of Culture and Democracy in Sweden under Stefan Löfven. She joined the Green Party three days before being appointed.

Bah Kuhnke presented the Mickey Mouse Club during the early 1990s on SVT. She had her own talk show on TV4 called Alice Bah between 1998 and 1999.

All content from Kiddle encyclopedia articles (including the article images and facts) can be freely used under Attribution-ShareAlike license, unless stated otherwise. Cite this article:
Alice Bah Kuhnke Facts for Kids. Kiddle Encyclopedia.