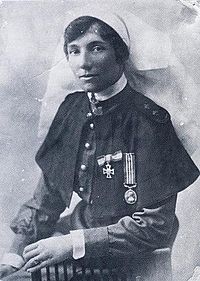 Alys Ross King ARRC MM (5 August 1887 – 17 August 1968), known as Alice Ross-King (later Alice Appleford), was an Australian nurse who served during both World Wars. During World War I, she served in hospitals in Egypt and France. She was one of only seven Australian nurses awarded with the Military Medal for gallantry (military courage). She also held a senior post within the Australian Army Medical Women's Service during World War II. In 1949, she was awarded the Florence Nightingale Medal, the highest award made by the International Committee of the Red Cross.

Ross-King was born in Ballarat, Victoria. At a young age, she moved with her family to Perth, Western Australia. Her father, Archibald Ross King, and two brothers died after drowning in Swan River. After the accident, her mother, Henrietta King, moved to Melbourne with Alys. After joining the Australian Army Nursing Service, she started using the spelling "Alice" and added a hyphen to her surname.

Ross-King was engaged to Harry Moffitt during World War I. He died during the Battle of Fromelles in 1916. After the war, she married Sydney Theordore Appleford. The couple had four children. Her husband died in 1958. Ross-King died in Cronulla, Sydney, on 17 August 1968. She was 81.

All content from Kiddle encyclopedia articles (including the article images and facts) can be freely used under Attribution-ShareAlike license, unless stated otherwise. Cite this article:
Alice Ross-King Facts for Kids. Kiddle Encyclopedia.