All Saints' Church, Oakham is a parish church in the Church of England in Oakham, Rutland. 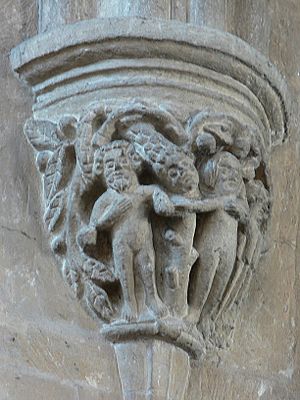 The spire of Oakham parish church dominates distant views of the town for several miles in all directions. The impressive tower and spire, built during the 14th century in the "Decorated Gothic" style, are slightly earlier in date than most of the rest of the exterior of the building, which (apart from some Victorian restoration) is in the "Perpendicular Gothic" style. Oddly, the south doorway and its porch seem to be the oldest parts of the church, the doorway probably dating from the early 13th century with the porch having been added later that century.

In the light, spacious interior there is more evidence of the mature Decorated style of the 14th century. The tall, slender columns of the nave have intricately carved capitals showing animals, birds, figures, foliage and scenes from the Bible including Adam and Eve, the Expulsion from the Garden of Eden, the Annunciation and the Coronation of the Virgin Mary. There is also a fine Green Man.

Oakham Parish Church is in a team ministry with:

During the church restoration in 1858 the first stage of the tower was fitted with a new ringing floor and the bells were rehung in a new oak frame. Two bells were re-cast by Mears of London.

On 9 December 1923 the tenor bell broke loose from the headstock but fortunately was captured in the bell frame and did not penetrate into the ringing room. The bell frame was still in a poor condition in 1937 which prevented it being used to ring for the Coronation of King George VI. 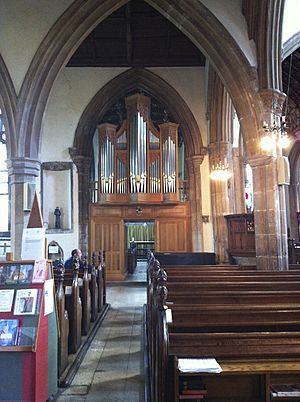 Organ by Kenneth Tickell from 1996

The new two manual pipe organ dates from 1996 and is by the builder Kenneth Tickell and Company. A specification of the organ can be found on the National Pipe Organ Register.

All content from Kiddle encyclopedia articles (including the article images and facts) can be freely used under Attribution-ShareAlike license, unless stated otherwise. Cite this article:
All Saints' Church, Oakham Facts for Kids. Kiddle Encyclopedia.