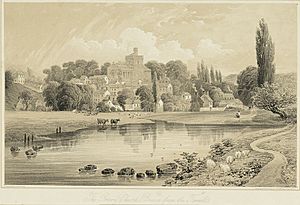 Brecon Cathedral, (Welsh: Eglwys Gadeiriol Aberhonddu) in the town of Brecon, Powys, is the cathedral of the Diocese of Swansea and Brecon in the Church in Wales and seat of the Bishop of Swansea and Brecon. Previously the church of Brecon Priory and then the Parish Church of St John the Evangelist, it became Brecon Cathedral following the disestablishment of the Church in Wales in 1920 and the creation of the diocese in 1923.

Because of the characteristic round shape of its churchyard, the cathedral is thought to be on the site of an earlier Celtic church, of which no trace remains. A new church, dedicated to St. John, was built on the orders of Bernard de Neufmarché, the Norman knight who conquered the kingdom of Brycheiniog in 1093. He gave the church to one of his followers, Roger, a monk from Battle Abbey, who founded a priory on the site as a daughter house of Battle. The first prior at Brecon was Walter, another monk from Battle. Bernard de Neufmarché also endowed the priory with lands, rights and tithes from the surrounding area, and, after his death, it passed to the Earls of Hereford, so giving it greater prosperity. The church was rebuilt and extended in the Gothic style in about 1215, during the reign of King John. In the Middle Ages, the church was known as the church of Holy Rood or Holy Cross, because it owned a great "golden rood" which was an object of pilgrimage and veneration until it was destroyed in the Dissolution of the Monasteries in the 16th century. The smoke-blackened roof of its hall was built between 1237 and 1267. 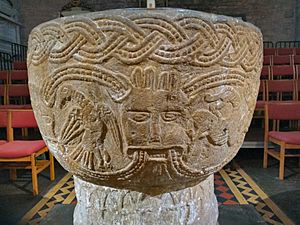 Font with Green Man and Tree of Life

In 1538 the Prior was pensioned off, and the priory church became the parish church. Some of the surrounding buildings were adapted for secular use; and others, such as the cloisters, were left to decay and later demolished. By the 19th century, the church was in poor repair and only the nave was in use. Some restoration took place in 1836, but major renovation of the church did not start until the 1860s. The tower was strengthened in 1914.

The cathedral is a Grade I listed building.

In recent years, some of the buildings in the cathedral close have been converted into a diocesan centre, a heritage centre and exhibition, as well as a shop and "Pilgrims'" restaurant.

Charles Lumley (1824–1858), awarded the Victoria Cross during the Crimean War, was buried in the cathedral churchyard.

The present Dean is Paul Shackerley, who was appointed in September 2014, in succession to Geoffrey Marshall who retired earlier that year.

A specification of the pipe organ can be found on the National Pipe Organ Register.

There are five bells but they have become unringable.

All content from Kiddle encyclopedia articles (including the article images and facts) can be freely used under Attribution-ShareAlike license, unless stated otherwise. Cite this article:
Brecon Cathedral Facts for Kids. Kiddle Encyclopedia.