All Saints’ Church, Sawley, is a Grade I listed parish church in Sawley, Derbyshire, England.

The church dates from the 11th century but the existing structure is mainly thirteenth century and contains Saxon and Norman work. The chancel was restored in 1865 at the expense of the Ecclesiastical Commissioners. More substantial work was carried out in 1889 at a cost of £2,000, when a new roof, new flooring and new seating were provided. The church reopened on 23 October 1889 by the Bishop of Southwell. 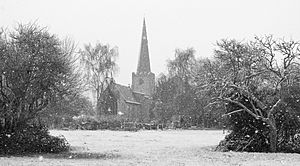 All Sanits Church during a snowfall in January 2018.

The pipe organ dates from 1906 when an instrument was installed by Harrison and Harrison. Details of the organ can be found on the National Pipe Organ Register.

The parsonage house dates from 1822–24 and was designed by Henry Moses Wood.

All content from Kiddle encyclopedia articles (including the article images and facts) can be freely used under Attribution-ShareAlike license, unless stated otherwise. Cite this article:
All Saints' Church, Sawley Facts for Kids. Kiddle Encyclopedia.