All Souls Church is a conservative evangelical Anglican church in central London, situated in Langham Place in Marylebone, at the north end of Regent Street. It was designed in Regency style by John Nash and consecrated in 1824.

As it is directly opposite Broadcasting House, the BBC often broadcasts from the church. As well as the core church membership, many hundreds of visitors come to All Souls, bringing the average number of those coming through the doors for services on Sundays to around 2,500 every week. All Souls has an international congregation, with all ages represented. 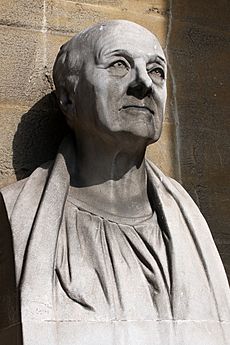 Bust of architect John Nash outside the church

The church was designed by John Nash, favourite architect of King George IV. Its prominent circular-spired vestibule was designed to provide an eye-catching monument at the point where Regent Street, newly-laid out as part of Nash's scheme to link Piccadilly with the new Regent's Park, takes an awkward abrupt bend westward to align with the pre-existing Portland Place.

All Souls was a Commissioners' church, a grant of £12,819 (equivalent to £900,000 in 2018)2018 being given by the Church Building Commission towards the cost of its construction. The commission had been set up under an act of 1818, and Nash, as one of the three architects employed by the Board of Works, had been asked to supply specimen designs as soon as the act was passed. It was, however, one of only two Commissioners' churches to be built to his designs, the other being the Gothic Revival St Mary, Haggerston. All Souls is the last surviving church by John Nash.

The building was completed in December 1823 at a final cost of £18,323 10s 5d. and was consecrated the following year by the Bishop of London.

The church is built of Bath stone. It consists of a prominent spired circular vestibule, attached to a much more reticent main church by the width of a single intercolumniation. The idiosyncratic spire is composed of seventeen concave sides encircled by a peripteros of Corinthian columns, making two separate sections.

Nash's design was not met with universal praise. A reviewer for The Mirror of Literature, Amusement, and Instruction 2 August 1828, wrote:

To our eye, the church itself, apart from the tower, (for such it almost is) is perhaps, one of the most miserable structures in the metropolis,—in its starved proportions more resembling a manufactory, or warehouse, than the impressive character of a church exterior; an effect to which the Londoner is not an entire stranger. Here, too, we are inclined to ascribe much of the ridicule, which the whole church has received, to its puny proportions and scantiness of decoration, which are far from being assisted by any stupendousness in their details, the first impression of which might probably have fixed the attention of the spectator. Indeed, the whole style of the tower and steeple appears peculiarly illadapted for so small a scale as has here been attempted.

The Rector of All Souls Church is still appointed by the Crown Appointments Commission at 10 Downing Street. The links with the Crown date back to the time of George IV when the Crown acquired the land around the church. The Coat of Arms adorns the West Gallery.

On 8 December 1940, a Luftwaffe parachute mine exploded during the Blitz, causing extensive damage to the church. The church was closed for some ten years while repair works were carried out. During this time, the congregation met for worship at St. Peter's, Vere Street. Although many furnishings survived the bombing, such as the pulpit, these are no longer to be seen in the church.

In the early 1970s excavations were carried out at All Souls and when it was discovered that the foundations to the church were some 13 feet deep, the church undertook a massive building project under the supervision of then rector, Michael Baughen (who later became Bishop of Chester, before returning to the London diocese to become an honorary assistant bishop). The decision was taken to embark on this work, to facilitate having a hall area underneath the church for the congregation and visitors to meet together after services and during the week. At the same time, the opportunity was taken to restructure the interior of the church to make it more suitable for present day forms of worship. It was at this time, that most fittings such as pews and choir stalls were removed, and the plain carpeted interior with moveable chairs was introduced.

All Souls is well known for its musical tradition and part of this includes the Hunter organ installed in the west gallery in a Spanish mahogany case designed by Nash. The case was enlarged and extended in 1913. In 1940, anticipating war damage to the church, the organ was dismantled and put into storage, then in 1951 remodelled and rebuilt, with a new rotatable electric manual and pedal console, and installed in the chancel by the firm of Henry Willis (IV). The organ was again rebuilt, by Harrison & Harrison, during the building project of 1975–1976, when a four-manual console was added, plus a positive division and a pronounced fanfare-trumpet en-chamade. In 1933, John Ivimey was appointed as organist and Director of Music.

Musical worship mixes contemporary and traditional styles, featuring either the church's worship band, orchestra, singing group or choir at all the main regular Sunday services, under the leadership of Michael Andrews. In 1972, the All Souls Orchestra was founded by former director of music and Emeritus Conductor, Noël Tredinnick, and has accompanied Sir Cliff Richard, Stuart Townend and other notable Christian artists. The orchestra and a massed choir perform annually at the Royal Albert Hall for the All Souls "Prom Praise" concert, which also tours across the UK and internationally. "Prom Praise for Schools" is sometimes held alongside Prom Praise, providing children from across the Diocese of London the chance to sing with the All Souls Orchestra. In 2012, the All Souls Orchestra celebrated its 40th anniversary, alongside special guests including Graham Kendrick, Keith & Kristyn Getty, and Jonathan Veira.

All Souls celebrates four services each Sunday, with an early morning Holy Communion service at 8:00 am, followed by two other services at 9:30 am and 11:30 am and an evening service at 5:30 pm. There is also a midweek service on Thursdays during term time at 1:05 pm.

Sermons from Sunday services are uploaded for free streaming and download by the following Monday afternoon. The archive now contains over 3,000 sermons.

The church stands in the conservative evangelical tradition of the Church of England. As it rejects the ordination/leadership of women, it receives alternative episcopal oversight from the Bishop of Maidstone (currently Rod Thomas). 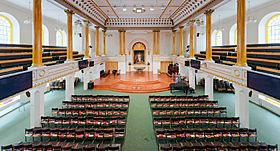 All Souls Church interior as viewed from the balcony

The most recent rector was the Revd Hugh Palmer, who, as of July 2012[update], is also a chaplain to the queen. Other clergy staff include Rico Tice, who has developed the Christianity Explored course (an introduction to Christian beliefs based on the Gospel of Mark and influenced by the conservative evangelical tradition), Jonny Dyer, Luke Ijaz and Steve Nichols. As a reflection of the huge diversity of the church's congregation (over 60 nationalities represented amongst the c. 2500 present on Sundays), the staff team has gradually become more international (Kenya, the United States, Canada, South Africa, New Zealand, Sweden, Germany, Hungary, Korea and Ireland amongst others).

One of the church's most notable clerics was John Stott CBE, who was associated with All Souls for his entire ministry and virtually all his life. The author of more than fifty Christian books, Stott was regarded as an important theologian and leader of the evangelical movement during the 20th century. Stott was a curate at All Souls 1945–1950 and rector 1950–1975. He resigned as rector in 1975 to pursue his wider ministry, but maintained his involvement with the church and was given the title of Rector Emeritus, which he held until his death in 2011. Stott's obituary in Christianity Today described him as "An architect of 20th-century evangelicalism [who] shaped the faith of a generation."

The Revd Richard Bewes was rector from 1983 until his retirement in 2004. He was awarded an OBE for services to the Church of England.

All content from Kiddle encyclopedia articles (including the article images and facts) can be freely used under Attribution-ShareAlike license, unless stated otherwise. Cite this article:
All Souls Church, Langham Place Facts for Kids. Kiddle Encyclopedia.