Allendale is a census-designated place (CDP) in Ottawa County in the U.S. state of Michigan. The population was 17,579 at the 2010 census. It is located within Allendale Charter Township, occupying approximately the northern two-thirds of the township, from the eastern boundary with the Grand River west along Pierce St., north along 75th Ave., then west along Lake Michigan Drive (M-45) to the western boundary of the township. It is a part of the Grand Rapids-Muskegon-Holland, Michigan combined statistical area, and is an exurb of Grand Rapids, due to its major commuter routes into the city (M-45 and I-96).

Allendale is named for the township. The township was organized in 1849, state senator Pennoyer changed the name to Allendale, after Agnes Allen, the first person on the tax roll in the area and the widow of Hannibal Allen, who was the son of Revolutionary War hero Ethan Allen.

Allendale is home to the main campus of Grand Valley State University.

Allendale was first settled in 1842 by Richard Roberts.

There were 2,864 households, out of which 38.5% had children under the age of 18 living with them, 57.8% were married couples living together, 6.3% had a female householder with no husband present, and 33.2% were non-families. 16.1% of all households were made up of individuals, and 3.5% had someone living alone who was 65 years of age or older. The average household size was 2.98 and the average family size was 3.36. 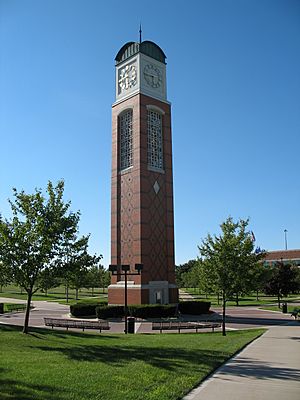 All content from Kiddle encyclopedia articles (including the article images and facts) can be freely used under Attribution-ShareAlike license, unless stated otherwise. Cite this article:
Allendale, Michigan Facts for Kids. Kiddle Encyclopedia.