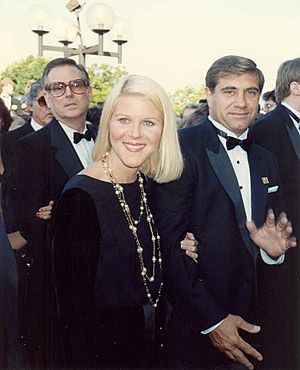 Alley Mills (born May 9, 1951) is an American actress. She was born in Chicago, Illinois on May 9. Mills has appeared in the television shows Yes, Dear, Dr. Quinn, Medicine Woman, Strong Medicine and Sabrina the Teenage Witch. She has appeared in theater productions. Mills plays the character Pam Douglas in The Bold And The Beautiful.

All content from Kiddle encyclopedia articles (including the article images and facts) can be freely used under Attribution-ShareAlike license, unless stated otherwise. Cite this article:
Alley Mills Facts for Kids. Kiddle Encyclopedia.