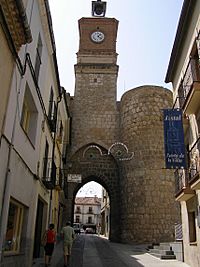 Almazán is a city in Castilla y León, in Spain. The city name comes from Arabic. There it means The fortified place. It is located about 32 km south of the capital of the province (Valladolid), and about 192 km from Madrid. Today, about 5.700 people live there.

The city has a long history. In it, the Pedro IV of Aragon and Enrique II of Castilla signed the truce between Castillla and Aragon. Juan Hurtado de Mendoza was the majordomo of king Enrique III. The king Enrique IV of Castilla gave the city to him. He also got to supervise the city. Later the duchy was divided into two different parts.

The city itself was governed by the Alcalde Mayor. He was helped by a committee of people from the city (3 noblemen, and 3 from the Hidalgo class).

The city belonged to the county of Altamira. The counts descended from Hernando de Mendoza.

Diego Laínez was a Jesuit monk who was born in the city. He was a companion to San Ignacio de Loyola. He also succeeded him as head of the Society of Jesus, a Catholic religious order. Laínez later had a large influence in the Council of Trent.

Most of the city is built in a Romanesque style. There are also some examples of Baroque, Renaissance and Gothic art styles.

Some of the notable buildings are:

All content from Kiddle encyclopedia articles (including the article images and facts) can be freely used under Attribution-ShareAlike license, unless stated otherwise. Cite this article:
Almazán Facts for Kids. Kiddle Encyclopedia.