Alpha Beam With Ernie is an edutainment video game released for the Atari 2600 by Atari in 1983. It was developed in conjunction with the Children's Computer Workshop. The game was programmed by Michael Callahan and Preston Stuart. 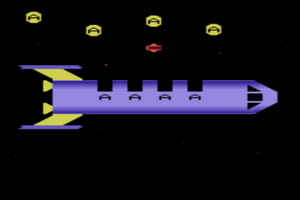 The object of Alpha Beam is to help Sesame Street's Ernie pilot a small shuttle, collect fuel tanks (marked by a letter of the alphabet), and return them to his space ship so that he can return to Earth.

The game was marketed as a family-friendly game that could teach children pre-reading skills such as identifying and matching letters. Alpha Beam was compatible with the Atari Kid's Controller, which was sold separately, although the regular keyboard controller is also compatible.

All content from Kiddle encyclopedia articles (including the article images and facts) can be freely used under Attribution-ShareAlike license, unless stated otherwise. Cite this article:
Alpha Beam with Ernie Facts for Kids. Kiddle Encyclopedia.