The Alta Vista Botanical Gardens is a botanical garden located in Vista, California, in the United States. The mission of the gardens is to "bring together people, nature and art". The purpose of the garden to provide an interactive living classroom for North San Diego County students.

"Plans for a botanical garden in Vista go back more than 35 years, and a nonprofit formed in 1999 to oversee the project". In November 2005, the gardens' board of directors adopted a new master plan created by Todd Cure', Bryan Morse and Ron Holloway, for a collection of themed garden spaces and gathering spots that were to be built on 13 acres (5.2 ha) of city-owned land at the top of a hill in Brengle Terrace Park. Shortly after, the Vista City Council unanimously approved the plan. Council members called the plan "inspiring" and "magical" and acknowledged that the gardens have been a long-awaited goal of the city. "A lot of dreams went into this", Councilwoman Judy Ritter said after the vote. In April 2009, a final plan for Alta Vista Garden's new Bugs, Birds & Butterflies Children's Garden was submitted to the board for approval.

The garden owes its design and growth to many talented individuals. 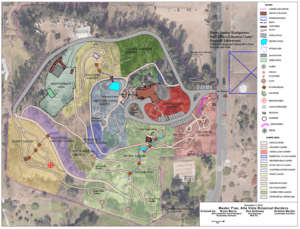 This is the complete Master Plan for Alta Vista Botanical Gardens that was approved by the board of the gardens and subsequently submitted to the city of Vista in the fall of 2013.

The gardens are certified by the North American Butterfly Association as a butterfly habitat and as a wildlife habitat by the National Wildlife Federation. Part of this is a pledge to be chemical and pesticide free. "The Garden utilizes only natural solutions toward the maintenance and health of the Gardens. Everything at Alta Vista Gardens is done naturally", Bryan Morse said. "Here, we're totally organic," he said. "We're a nature habitat. We don't use any chemicals at all. We don't use any bug spray. We don't use fertilizers unless they're 100 percent organic. Everything is done that way. That's why we have more hummingbirds and more butterflies and more ladybugs and everything else. The nature is coming to the place." Of special interest to visitors is the incredible array of butterflies that fill the air all over the gardens. Early on, a conscious effort was made to plant the primary food sources of many different butterfly species. The result, large colonies are making their home at Alta Vista Gardens. Over the years the gardens have planted thousands of milkweed plants; this is the host plant for the monarch butterfly. The dominant variety is Asclepias curassavica however, Asclepias eriocarpa may be found in the California Native and the Desert Gardens. A large part of the Jungle Garden is dedicated to the creation of a sub-tropical food forest which creates habitat for butterflies and birds. Although the Children's Garden is the central home of the monarch butterfly colony, butterflies can now be found in all corners of the gardens.

Art in the Garden

Alta Vista Garden's mission is to "bring together people, nature and art". Patrice Dunn donated the first sculpture to Alta Vista Gardens and others followed. Below is a list of artists in the order that they joined the garden.

All content from Kiddle encyclopedia articles (including the article images and facts) can be freely used under Attribution-ShareAlike license, unless stated otherwise. Cite this article:
Alta Vista Gardens Facts for Kids. Kiddle Encyclopedia.