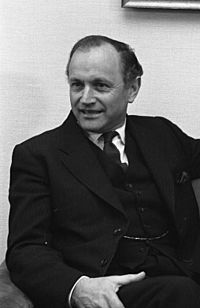 Alun Arthur Gwynne Jones, Baron Chalfont, OBE, MC, PC (5 December 1919 – 10 January 2020) was a British politician. He was a retired British Army officer and historian. He was awarded the Efficiency Medal in October 1950. He was a minister in the Foreign and Commonwealth Office from 1964 to 1970 and appointed to the Privy Council in the former year.

On 27 March 1967, in the House of Lords, Chalfont became the spokesman/figurehead for Harold Wilson. He was the author of several military history books on subjects including the Napoleonic Wars.

All content from Kiddle encyclopedia articles (including the article images and facts) can be freely used under Attribution-ShareAlike license, unless stated otherwise. Cite this article:
Alun Gwynne Jones, Baron Chalfont Facts for Kids. Kiddle Encyclopedia.