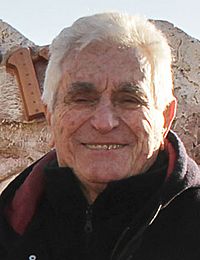 The IFFHS ranked Carrizo as the best South American keeper of the 20th century in 1999. Carrizo was named world's best goalkeeper of the 1950s by Berlin-Britz.

He played for the Argentina national football team with significant success, especially against Brazil, but he also suffered a 6–1 defeat against Czechoslovakia, in the 1958 FIFA World Cup. He played for the national team from 1954 to 1964.

All content from Kiddle encyclopedia articles (including the article images and facts) can be freely used under Attribution-ShareAlike license, unless stated otherwise. Cite this article:
Amadeo Carrizo Facts for Kids. Kiddle Encyclopedia.