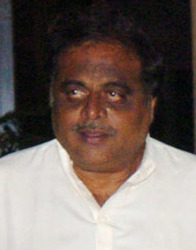 Malavalli Huchche Gowda Amarnath (29 May 1952 – 24 November 2018) known by his screen name Ambareesh, was an Indian actor and politician. He was known for his Bollywood movie roles in Naagarahaavu and in Paduvaaralli Pandavaru. He was known as Mandayada Gandu (English: Man of Mandya). He was born in Doddarasinakere, Karnataka.

In his political career, Ambareesh, a member of the Indian National Congress, was elected to the Lok Sabha in 1998 and retired in 2009. He also was India's Minister of Information and Broadcasting from 2006 to 2007 when Manmohan Singh was Prime Minister.

Ambareesh died on 24 November 2018 at a Bangalore hospital from a heart attack at the age of 66.

All content from Kiddle encyclopedia articles (including the article images and facts) can be freely used under Attribution-ShareAlike license, unless stated otherwise. Cite this article:
Ambareesh Facts for Kids. Kiddle Encyclopedia.