Amblyomma sphenodonti or the tuatara tick is a species that parasitises only the tuatara of New Zealand, and is not closely related to any other tick. It is found on just four of the twelve island groups where tuatara survive, preferring islands where the reptiles live in high densities. Larvae, nymphs, and adults all feed exclusively on tuatara blood, and ticks can survive for up to a year without a host. When tuatara are translocated, the tick has been lost or survives only in low densities in the new population.

Adult tuatara ticks are nearly circular, light brown and 2 millimetres (0.079 in) long. They were first described by Lionel Jack Dumbleton in 1943. The holotype male specimen was collected from Stephens Island by E. J. Tillyard in January 1922 and later deposited in the New Zealand Arthropod Collection. Originally, this species was placed in the genus Aponomma, as members of this genus mostly parasitise reptiles. More primitive Aponomma were placed into the genus Amblyomma in 2002. Phylogenetic analyses suggest that this tick is not closely related to other ticks in the genus Amblyomma and it may need to be placed in its own genus.

The tick has a three-stage life cycle, with all stages parasitising the tuatara. Females that have fed on the host's blood detach from the tuatara and lay eggs. This occurs in the tuatara's burrow. When the eggs hatch, the larvae attach to a tuatara, feed and detach. After moulting, the resulting nymph also attaches and repeats the cycle of feeding, detaching and moulting to become an adult tick. This life cycle may take 2–3 years. 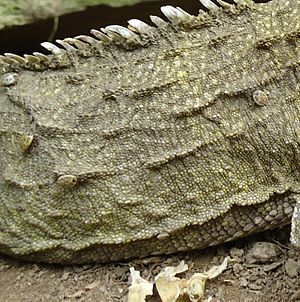 Tuatara ticks on the body of their host, Sphenodon punctatus

Tuatara are reptiles that use burrows for shelter. Their ticks can spend over one year off their host and prefer the moist and dark habitats provided by these burrows. Their preference for humid and dark conditions may be an adaptive feature for remaining inside or finding burrows where the host resides. Tuatara live in a variety of habitats and are parasitised by ticks in all of them. The density of ticks on tuatara are higher when the host lives in pasture than in canopy forest. Tuatara ticks mirror the nocturnal activity of tuatara. They are more mobile at night, which could increase the chance of unattached ticks finding a host. It could also reduce the likelihood of desiccation due to the increased humidity at night. They prefer attaching in positions on the back of the host, folds in the skin of the rear legs and the side of the body. Once attached, they feed on the host's blood. Unfed adult ticks have been observed to survive for over one year without their host.

All content from Kiddle encyclopedia articles (including the article images and facts) can be freely used under Attribution-ShareAlike license, unless stated otherwise. Cite this article:
Amblyomma sphenodonti Facts for Kids. Kiddle Encyclopedia.