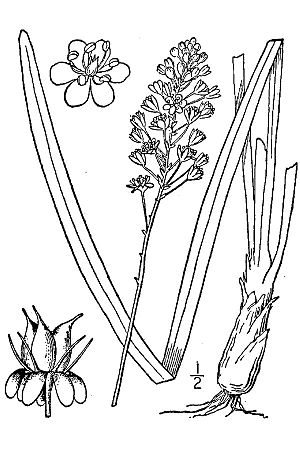 Amianthium is a North American genus of perennial plants growing from bulbs. It contains the single known species Amianthium muscitoxicum, known in English as fly poison from a literal translation of the Latin epithet muscitoxicum, and is noted for its pretty flowers and its toxic alkaloid content. While all parts of the plant are poisonous, the bulb is particularly toxic. The scientific epithet was given to it by Thomas Walter when he published his Flora Caroliniana in 1788.

The bulb was mixed with sugar by American colonists to kill flies.

The toxic alkaloids present in the roots and leaves include jervine and amianthine. Amianthium is self-incompatible and is pollinated mostly by beetles. It is native to eastern North America, as far north as Pennsylvania, west roughly to the Appalachian Mountains (with an additional area in the Ozarks), and south to northern Florida and eastern Louisiana.

Within the family Melanthiaceae, Amianthium is a member of the tribe Melanthieae. Molecular phylogenetic studies in the 21st century have resulted in some changes to placements within this tribe. A. muscitoxicum has sometimes been placed in the genus Zigadenus (as Z. muscitoxicus); however its position as a separate genus is consistent with currently available information. (See also Phylogeny of Melanthieae.)

Amianthium species which have been placed in other genera include:

All content from Kiddle encyclopedia articles (including the article images and facts) can be freely used under Attribution-ShareAlike license, unless stated otherwise. Cite this article:
Amianthium Facts for Kids. Kiddle Encyclopedia.