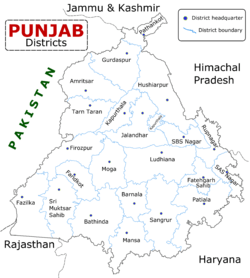 Districts of Punjab along with their headquarters

Amritsar district (Doabi:ਤਾਲੁਕਾ ਅੰਮ੍ਰਿਤਸਰ) is one of 19 districts in the state of Punjab in West India. It has a population over 3,000,000 and covers an area of 5075 km². The city of Amritsar is headquarters of this district.

During British Rule Amritsar was part of Lahore Division and was subdivided into 3 tehsils, there were - Amritsar taluka, Tarn Taran taluka and Ajnala taluka. However, as part of the partition of India in 1947 Amritsar district was separated from the rest of the division and given to India. During the partition period, the Muslim population of the district, some 46%, left for Pakistan while Hindus and Sikhs from Pakistan settled in the district.

Jatt population of Amritsar according to 1901 census

All content from Kiddle encyclopedia articles (including the article images and facts) can be freely used under Attribution-ShareAlike license, unless stated otherwise. Cite this article:
Amritsar District Facts for Kids. Kiddle Encyclopedia.