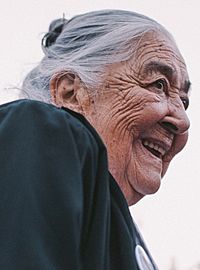 González joined the Association of Relatives of the Disappeared Detainees (AFDD) and became one of its primary leaders alongside Sola Sierra, Viviana Díaz, and Clotario Blest. She participated in a hunger strike at the United Nations Economic Commission for Latin America and the Caribbean headquarters in Santiago.

In 1996, she was the focus of the Televisión Nacional de Chile-broadcast documentary Quiero llorar a mares and in 2001 won the Premios Ondas for Ibero-America for the Best Program or Professional or Television Station.

In June 2000, she sued former dictator Augusto Pinochet for the disappearance of her family 26 years prior.

González died from a lung infection in Santiago on 26 October 2018 at the age of 93.

All content from Kiddle encyclopedia articles (including the article images and facts) can be freely used under Attribution-ShareAlike license, unless stated otherwise. Cite this article:
Ana González de Recabarren Facts for Kids. Kiddle Encyclopedia.