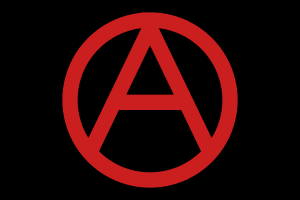 Anarchy refers to the state of a society being without authorities or a governing body, and the general confusion and chaos resulting from that condition. It may also refer to a society or group of people that totally rejects hierarchy.

In practical terms, anarchy can refer to the reduction or ending of traditional forms of government and institutions. It can also select a nation or any inhabited place that has no system of government or central rule. Anarchy is mainly supported by individual anarchists who suggest replacing government with voluntary institutions.

The word anarchy comes from the ancient Greek ἀναρχία (anarchia) "without, not" and ἀρχή (arkhi), "ruler, authority". Together these words refer to the state of a society being without authorities or an authoritative governing body.

All content from Kiddle encyclopedia articles (including the article images and facts) can be freely used under Attribution-ShareAlike license, unless stated otherwise. Cite this article:
Anarchy Facts for Kids. Kiddle Encyclopedia.