Anarkali (meaning Pomegranate blossom) was the name of a legendary dancing girl. She is said to have lived in Lahore (now in Pakistan) in the time of the Mughal Emperor Akbar. She fell in love with prince Selim (who later became the Emperor Jahangir) but was punished by his father, Akbar. She is supposed to have died in Lahore and it is said her grave is also there. The famous Anarkali Bazaar in Lahore was named after her. 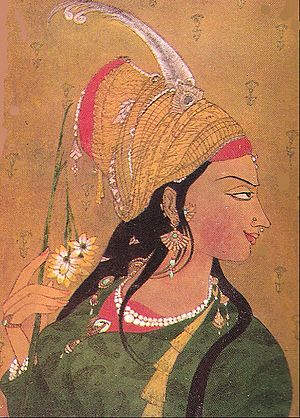 All content from Kiddle encyclopedia articles (including the article images and facts) can be freely used under Attribution-ShareAlike license, unless stated otherwise. Cite this article:
Anarkali (girl) Facts for Kids. Kiddle Encyclopedia.