Anarkali Bazaar or Anarkali Market is an old style market in Lahore, Pakistan. 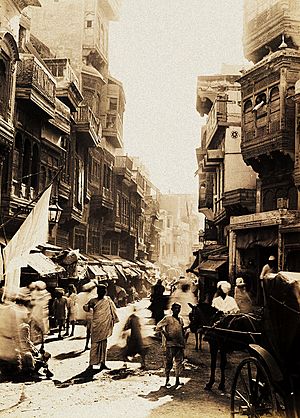 The name and origins

The word 'Anarkali' means 'Pomegranate Blossom'. According to a legend, this was the name of a beautiful dancing-girl. She fell in love with the Mughal prince Selim (who later became the Emperor Jahangir). But the prince's father, the old Emperor Akbar, did not like the girl. So he had the girl arrested and punished. She died and was buried near a bazaar or market. Later, when prince Selim became Emperor he named the bazaar after her. Today, there is an old tomb near there. Jahangir built it in 1615. People say this is the tomb of the real Anarkali, but no one is certain. Another famous tomb near Anarkali Bazaar is Sultan Qutb-ud-din Aibak's tomb

Today, the Anarkali Bazaar is one of the best shopping areas in all of South Asia. Women love to go there because it has excellent clothes, shoes and jewelry shops. There are some nice places to eat there, too. It is open most days from 9 in the morning to 11 at night. There are always many lights and music playing there. There is also a lot of traffic.

All content from Kiddle encyclopedia articles (including the article images and facts) can be freely used under Attribution-ShareAlike license, unless stated otherwise. Cite this article:
Anarkali Bazaar Facts for Kids. Kiddle Encyclopedia.