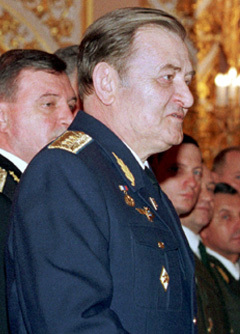 Anatoly Mikhaïlovich Kornukov (Russian: Анатолий Михайлович Корнуков; 10 January 1942 – 1 July 2014) was a Russian army general from 1959 until 2002. He was a fighter pilot in the Soviet Air Defence Forces. He was commander-in-chief of the Russian Air Force from 1998 to 2002. He got internationally known when it was found out that he ordered Korean Air Lines Flight 007 to be shot down on 1 September 1983.

All content from Kiddle encyclopedia articles (including the article images and facts) can be freely used under Attribution-ShareAlike license, unless stated otherwise. Cite this article:
Anatoly Kornukov Facts for Kids. Kiddle Encyclopedia.